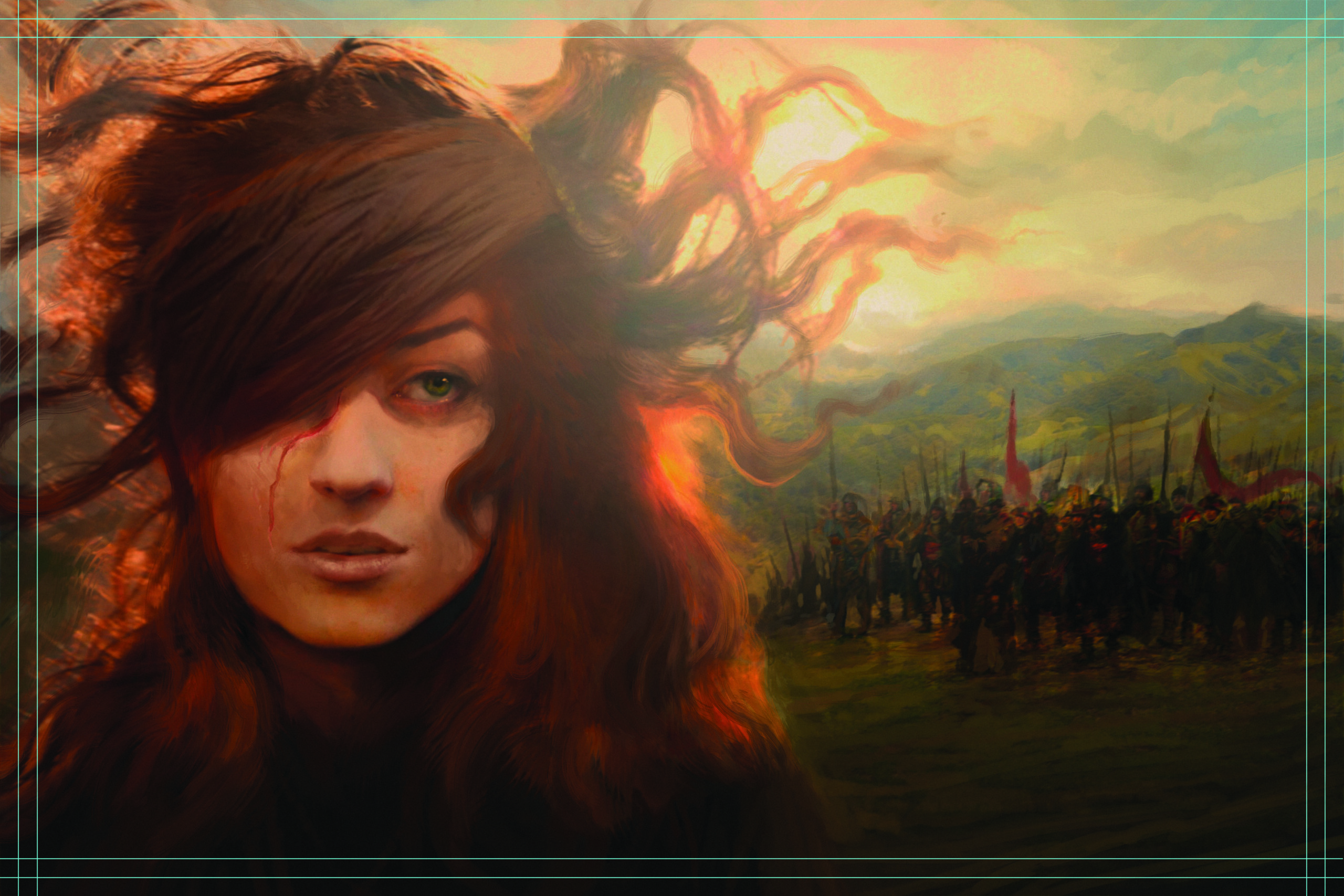 Elina Georginova began her letter to her parents.

I write to you with words that I can no longer speak. I see in Yevgeni the soul of the world – enduring, majestic, terrifying to behold in its wrath. And he is my friend, one of the few who understands me. Who is apart, like me.

Her pen drifted across the journal page as she sat in her room at the traveler’s inn. Elina looked out the window at the far edge of the table. She studied the Vilmot General Shop across the street and passerby of the Ussuran District of Five Sails. Even at thirty-four, the Eisen woman’s eyes emerged distrustful and piercing from within her loose brown locks of hair. She’d just returned from a trip to Soldano, and would set out tomorrow for Joppa. So tonight’s meal of roast and potatoes would be the most filling and hearty meal for a month, and the only bed without roots or branches. But even here in the comforts of the city, she still wore her dark green travel leathers to bed. After years of use, she couldn’t sleep without them.

I met him a few years ago – both of us seeking solitude in our own ways, because nobody else would understand our spirit. Yevgeni is hard to describe. Five Sails is a port city, and Yev often finds himself at odds with the Vodacce led by Don Constanzo Scarpa and his hot-headed son Servo. The Vodacce both honor and mock Yevgeni with the sobriquet of ‘Iron Bulwark.”  Honor as they grudgingly acknowledge Yev’s implaccable defense of those set upon by the Vodacce gangs. And mocking as they also consider Yev a brutish simpleton, incapable of more than the most basic fighting skills. But oh, Mama and Papa, you should know that his fellow Ussurans have named Yevgeni ‘The Boar.’ Where others see a simple pig, his compatriots and I see in Yev, so much more – a brave warrior who chooses his battle locales and opponents with tactical cunning before charging into the fray. His only regular companions are the woman Ved’ma, who I find unsettling, and his raven Temhota, who appears to share my opinion of her. We meet north of the city when I am in town so we can enjoy the free earth and grass under our step.

His story meanders from a village just south of Rurik by way of a long and arduous journey to Five Sails. He’s a farmer, but skilled enough to have built a house and barn with his own hands. Despite his unschooled upbringing, Yev is so powerful in the ways of Matushka that none dare stand against his righteous anger. I don’t know whether his inner power came after his tragedy, or whether the power drew those who attacked his family. Yev is withdrawn and moody, and slow to anger. But oh, you should see him come to the defense of those bullied or set upon. Like a blizzard, you can see him coming slow and implacable until he unleashes the fury of his fists and invoking Matushka against the oppressors.

A tapping at the open window drew her attention, and she turned to see a wisp of black feathers flutter down from the evening sky and settle upon the sill. She smiled, meeting its gaze as they both tilted their heads.

“Temhota. So she’s chased you out for the evening, has she?”

She took a small piece of roast and put it in the small tureen that had held three mouthfuls of soup. She pushed it towards the sill, and the raven gave a short hop and began pecking at the meat in the bowl. Elina smiled as the bird awked once in delight. Elina always asked for the attic room so the noise didn’t permeate the room, and as a regular patron, the loft was held for her. “You’re welcome.”

He has no time for my wanderings, or I’d take him back to Heilgrund so he might see the hills of my youth. So we share tales of bygone days. His wife and children, his dog, and the cabin he built by his own hands. As for myself, I recount you two, and brother Pieter. I wish you could meet him.

He carries the weight that so many of our own country folk bear – in a land of tragedy without reason, to survive can often only mean having been elsewhere when demons came. The good fortune feels unearned and unfair in the face of so many good souls lost. The Leshiye’s plan is strange and unknowable.

Elina paused as she remembered Yev on their walk today. Just as she smiled when she fed Temhota, she smiled in memory of being someone for whom neither pretense nor posture was needed.

“Today is much like the last day in my memory of them,” he sighed.

While Elina might speak of many people she met on her travels, Yev only spoke of them. Taisiya, a formidable woman and the daughter of pelt traders. Ivan, a son of ten and already burly and strong. Kalina, a daughter of eight years with golden hair like a wheat field near harvest, boundless and flowing.

Elina gestures followed the arc of the sky and the curve of the forest as it followed the river and then brought her palms together to form an outlined heart and finally pointed at Yev.

Yev paused and thought for a second as he interpreted Elina’s signs. “And it is a day they live in forever,” Yev had said. “They dwell in my heart.” Yevgeni had paused in his step, and turned his eyes to the ground. He pensively kicked his foot for a moment, and then noticed a plum on the ground. He reached to pick it up.

“Rotten.” He squished it in one hand, and thickly sour paste squirted between his fingers. He wiped the remains on his pant leg. Temhota had fluttered down from his shoulder and taken a nibble, angrily squawking in disgust and pecking his foot. The burly Ussuran had smiled as he accepted the rebuke.

“Yes, yes, my shadow. I should not look for strength in what has been left behind. I have more than enough food to eat, and beer to drink. I enjoy what I have.”

Elina had noticed a slight rustle in the foliage at the end of the fields. “The smell may attract unwelcome guests.” So they had turned back towards the town and enjoyed a quiet walk back.

I know you’ll like him. He has a soul every Eisen knows – touched by darkness, yet it shines like a candle at midnight. He is a glimpse of hope for those who have none, and he wields a power with the terrible clarity of one who has seen the darkness win. He knows the enemy cannot be vanquished without taking a part of it into yourself.

I don’t know when you can meet him. But when you do, he will embrace you with the spirit of one who knows your pain and how to walk out of the forest with it.

A sharp awk and a rustle of wings drew Elina back from her reverie.  “Goodbye my friend, give Yev my regards,” she said. She watched the raven recede into the distance. Elina then placed the quill back into the pot gently, and took the written pages from the table. She walked quietly across her room in the inn, flanked by twin shadows from the candle on the desk and the oil streetlight outside. She pulled the worn oaken case from the floor. She undid the latch and lifted the lid. Inside the case, resting in a small bed of straw and linen, lay a lacquered cedar box. The art was black lines etched into the white wood, her parents and younger brother at their dining table, taking their ease.

She gingerly pulled up the box lid. She placed the pages delicately atop a stack of similar correspondence. She closed the lid and rested her hands on the lacquered surface. She remembered preparing the ink. The demons had left so little of their bodies, in so terrible a state, that honorable burial had been impossible. The remains, cleansed by fire and mixed with water from the ruins of her town’s church font, had been enough for her to craft a memorial of happier times.

“Enjoy the letter, Mama and Papa. I long to speak with you, but for now putting these words to paper will have to do. Read it to young Pieter. I’ll join you someday, in the old country. And once again, our house will ring with laughter and joy.”

She closed the box and the chest, extinguished the candle, and let the darkness of night take her for a while in welcome embrace.